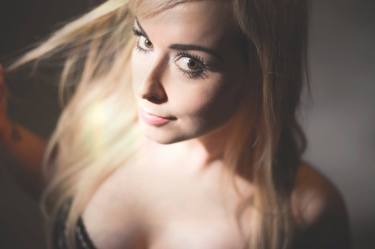 To some, she is known in Preston City Wrestling as the beauty and the brains behind the successful “Friends With Benefits” faction. Others at PCW will ultimately know her as the General Manager of the company. Aside from PCW she has continually made an impact in any promotion she has been a part of. Whether it’s entertaining fans in the UK or across the seas in the USA when she was in Ring of Honor and Evolve. With a successful acting career that has progressed from ring announcer to interviewing and then becoming a member of active roster, it’s clear that Joanna Rose is a name all wrestling fans should be watching out for.

I guess I’m slightly different in the sense that I didn’t choose to train to wrestle, I’m not sure I have the natural ability required for it, so I’m not the best person to ask re: a wrestling career as such. I’m a performer/presenter ultimately and a friend of mine asked me years ago if I’d do the ring announcing for his small, local promotion. I’m a huge wrestling fan so I jumped at the chance and figured it wouldn’t matter if I was no good at it. Turned out I wasn’t bad, and before long word of mouth meant I was contacted by more and more promoters asking if I’d work for them, either announcing or doing backstage interviewing, pre/post show videos for YouTube and sometimes in-ring interview segments during shows. PCW launched the campaign for a new ring announcer in 2013 so I sent in a video audition and the rest is history, as they say!

In Preston City Wrestling, your feud with Dave Rayne has continued throughout the year, with you defeating him for the #Boom Championship and then sacrificing him to a series of F.W.B members. How did this begin and how will you want it to end?

It all began because Dave Rayne wanted to be a part of my faction, let’s be honest! FWB is wrestling’s most powerful group, after all. But, unfortunately for him, he’s not quite on my radar in terms of FWB, if you know what I mean?! It’ll end when I say it ends, after he’s been annihilated by every single opponent I wish to book him against. Hashtag BOOM.

(Just kidding, I have a lot of respect and time for Dave, he’s found his niche and got over in his comedy character. I’m happy that we get to work together because, believe it or not, comedy acting is my favourite and the “match” with him was a lot of fun!)

You are known among many UK fans as the G.M of PCW, what makes PCW different from the variety of other wrestling promotions in the UK?

The UK wrestling scene is on fire right now, there’s no denying it and it’s exciting for all of us. There are so many hot promotions across the country but, in my opinion, what makes PCW different is that the promoter goes the extra mile to ensure that it has the best possible advantage in terms of production as well as talent (both homegrown and American) and extras like the post-show Q&As, comedy gigs, tribute to the troops free shows, etc. PCW gets the bigger picture and it’s most definitely TV ready…

Staying with PCW, fans have seen you change from ring announcer to the Leader of F.W.B and G.M of PCW, both with alarming success. How did you prepare for such a change and have you received any help during the transformation?

When I was first approached about taking on the role, I was nervous because it’s not something I had tried before and playing a character in a pro-wrestling environment is different to performing in live theatre or for TV, but I was excited to take on the challenge at the same time. There wasn’t a whole lot of time to prep for the initial reveal at Road To Glory as I had only been aware of the details a few days in advance, but I had help from guys like Chris Masters and Uhaa, both of whom are amazing and friends of mine. I took on board everything they told me and mixed it in with my acting experience, which seemed to pay off. I knew that the reveal would be the final segment of the RTG weekend so right up until then I made a point of enjoying ring announcing the shows, for obvious reasons. Between then and now I’ve received constant help, support & advice from the UK guys and I always ask the imports I work with for feedback too. I am new to this so my promos may not be perfect all the time, but I’m always willing to learn and improve. The fact that the PCW fans hate me so much is a good sign, and I’ve discovered I’m good at thinking on my feet when they heckle. The character is so much fun, and she’s only just getting started…

Fans who watched NXT Takeover were quick to point out that you were spotted behind WWE Champion, Seth Rollins and then Scott Hall & Kevin Nash, how did you find the experience from the show?

That was actually a total fluke, to end up on-screen behind all those stars was pretty cool. The view of Takeover itself, live, was phenomenal and I was happy to support all the guys I’ve previously worked with. You’ll definitely catch me at the UK Takeover taping in December!

In the US, fans across there have seen you in Evolve as well as seeing you in Ring of Honor. Do you find the experience performing in the U.S different to the UK, and is there any difference in attitudes towards wrestling between U.S & UK fans?

To be honest there’s not much difference, just a wider audience/exposure factor in the U.S. as the shows are on iPPV or TV. The fans are all very vocal. I guess all I would say is that PCW fans, in particular, are pretty creative with their chants! Whether English or American, though, they all demand excellent entertainment and are no fools when it comes to the dynamics of pro wrestling.

Many fans have commented on the UK wrestling industry going through a boom period, a sign that all promotions across the UK are showing improvements in ticket sales. Why do you think this is?

That’s a good question and I honestly believe it’s because the talent factor right now is so high, the UK guys are so good at what they do and it’s grabbing the attention of the large, popular promotions in the US. As the UK promotions become larger and more successful as a result, they’re also competing to be the best, resulting in some awesome shows that UK fans want to travel to.

You have worked alongside some of the best new talents in the UK, who do you think the fans should be keeping an eye for?

In my opinion, leaving aside some of the talents we already know are top of their game, I’d say the likes of Will Ospreay, Charlie Garrett and Jack Gallagher are ones to watch. It’s hard to choose though as there are so many!

You have worked with a series of amazing stars, The Dudley Boyz, Apollo Crews, Chris Masters, from past to present if time wasn’t a factor who would you have wanted to work with and why?

I may need to go back to my childhood to answer this question because I think my list would include Shawn Michaels, Bret Hart & Mr. Perfect just because they were my heroes, and probably the reasons I became a fan in the early 90s. Of course, there’s still time for some of that dream to come true…

Outside of wrestling, you have a Bachelor Degree in Drama & American Studies as well as being a three time Best Actress winner at The All England Amateur Theatre Festival. Has this helped you in your wrestling career and how?

I think it has helped simply because I love performing and apparently have some sort of talent for it. It’s my passion! You cannot suitably entertain fans without passion, especially in the wrestling business.

In SWA, you are aligned with former Heavyweight Champion, Joey Sanchez, a dangerous duo in the company. What’s your opinion on the SWA fans?

The SWA fans are very loyal – they support SWA as their local promotion and come to see the UK talent doing what they do best. They’re the life and soul of every show. And they hate me! I was ring announcer there and left for a while due to other commitments before they re-booked me as the heel faction manager. On my second show back I slapped the (beloved) promoter and then got knocked out by my own Champion. No-one came to check on me. Success!

Often appearing at ringside as a manager to your clients in many promotions. How important is it to have managers in the business?

I think it’s important because having “Managers” involved complements gimmicks and breathes extra life into characters. I do my best to add heat, as a heel, wherever possible by getting involved and basically cheating. All in the name of entertainment!

How do you feel about being through to the final of Gerweck’s Hot 100 Women Of Wrestling poll?

Absolutely stunned and amazed! I’m really chuffed, of course (there’s a word that my American friends probably won’t recognise), but did not expect that it’d be the case. If you voted for me, thank you! Being in the final is pretty awesome.

*You can vote for Joanna in the final of Gerweck’s Hot 100 Women Of Wrestling poll, here.

How can fans keep up to date with yourself on social media?

I don’t tend to accept friend requests on Facebook from people I don’t actually know.